President Trump referenced that some type of solution was possible for millions of undocumented residents if they do not have criminal records in an interview on the day of his Joint Session of Congress speech on February 28, 2017. That was a change in position for Trump and the administration. Of course, it may not have been a serious proposal.

The administration is currently conducting deportation raids against all undocumented because their status is prima facia illegal. “We are just upholding the immigration law.” And although Trump has stated that the focus is on apprehending criminals and drug and gang members, numerous stories made clear that many of those deported are guilty, at most, of minor offenses, such as failing to have a driver’s license or misuse of a Social Security Card to obtain work. In other words, prior to the statement by Trump, it was assumed that most undocumented residents were subject to deportation. The administration was slated to hire 15,000 additional immigration employees to implement the new sweeps.

Resistance to this approach is significant, both from elected officials and the public. If the President wanted to support an immigration reform bill, he’s greatly increased bargaining power of the anti-immigration position, i.e., in favor of more stringent conditions.

The American people would welcome a solution that avoids mass deportations, endless conflict among political jurisdictions and stories of family hardship. 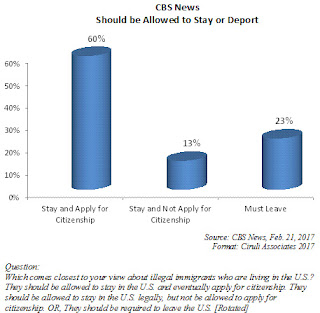 Polling done by our firm and others show that the majority of the public believe that immigration proposals of recent years requiring long waiting periods, speaking English, paying taxes and having no criminal record were popular. Only about a quarter of the population believes in expulsion, but it tends to be concentrated in the conservative wing of the Republican Party.
Posted by Floyd Ciruli at 9:45:00 AM