Steve Bannon, President Trump’s foreign policy strategist, has set his goal to help bring a conservative nationalist revolt throughout the developed world. He applauded, as did his boss, Brexit, and his rhetorical flourishes in the inaugural address were hailed by most of Europe’s anti-immigrant, anti-EU nationalist parties.

But, his strategy is also producing a left-wing counter-reaction. Mexico’s next government may be on the left (Andrés Manuel López Obrador) and a German socialist is taking on the center-right party of Angela Merkel by attacking Donald Trump’s and Bannon’s America First rhetoric (Martin Schutz). An anti-Trump, center-left independent in France also has surged in recent days (Emmanuel Macron), as attacking Trump has become a survival strategy of pro-EU liberal forces in Europe and the left generally. Trump and Bannon are stimulating movement of European and Mexican politics at least as much on the left as the right. 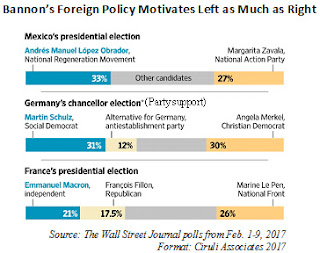