Christopher Hill, dean of Josef Korbel School of International Studies at DU and former U.S. ambassador to the Republic of Korea, told ABC News “This Week” with Martha Raddatz that he thinks President Trump’s rhetoric toward North Korea over its nuclear program “makes people nervous.” However, he believes the some of the administration's actions in response to the North Korean threat are positive.


“[Working with the Chinese] seemed to be an elusive concept at a certain point in time and, yet that, I think, is very much happening.” Hill said. 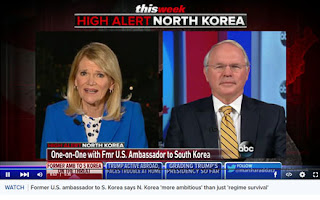