Donald Trump is a well-seasoned practitioner of the photo opportunity. He has built a valuable worldwide brand by mastering the urges and vagaries of modern media. And, while he may not have much experience or knowledge of government, he has applied his media talent with a vengeance to the presidency. From the transition parade into Trump Tower, to use of the “Winter White House,” to the endless signing ceremonies around the Resolute Desk, to the early start of 2020 campaign, Trump has controlled news cycles and become the number one topic in the world.

Usually non-stop coverage of a media savvy White House should accompany an uptick in approval ratings of the president’s job performance. But a host of polls, especially presidential approval, which has been collected since Harry Truman, show Trump’s record-low rating, starting at the inauguration, has slipped to even lower territory during Trump’s first ten weeks.

Historically, low approval ratings weigh a president down and damage his agenda. They drain legislative support, can undermine investor and consumer confidence and, of course, hurt a party’s candidate’s recruitment and fundraising. If ratings in the low 40 percent level continue, it will start a panic in the Republican Party later in 2017 over the possible loss of the House in 2018.

The President’s biggest problem is that the media strategy can’t replace the failure to accomplish some of the most high-profile goals. The current book-ends are the travel ban roll-out on February 27 and the Obamacare defeat on March 24. The two failures, combined with his Twitter posts, press altercations and fights with his own party, reinforce the impression of an administration not in control.

Importantly, the Peggy Noonan problem is a recurring drag on his approval. The country’s moderate to conservative establishment, including independents, supports many of Trump’s policies, but struggle with his style and tone.


“Near the end of the campaign I wrote a column called ‘Imagine a Sane Donald Trump,’ lamenting that I believed he was crazy, and too bad. Too bad because his broad policy assertions, or impulses, suggested he understood that 2008 and the years just after (the crash and the weak recovery) had changed everything in America, and that the country was going to choose, in coming decades, one of two paths – a moderate populism or socialism – and that the former was vastly to be preferred.”

Trump’s performance reinforces these doubts about his fitness for office however it’s labeled: temperament, judgment and character.

As of April 4, Trump’s approval rating is 40 percent and disapproval 53 percent in the RealClearPolitics average. Because it is a rolling average, Trump’s numbers are better than some recent polls that give him 35 percent (Quinnipiac) and 39 percent (Gallup). 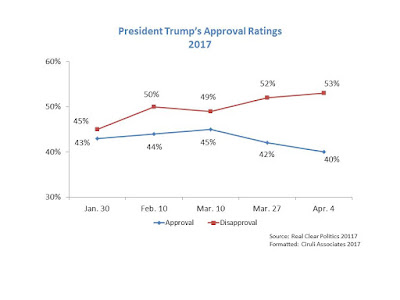