The first round of the French elections with 11 candidates will be held April 23. The run-off is May 7, 2017 if there is no majority candidate in the first round. As of April 7, two weeks out, Marine Le Pen (24%) of the right and Emmanuel Macron (24%) of the center-left are the frontrunners and tied. The remaining 52 percent of the voters are scattered among the other nine candidates and undecided. All eleven candidates just debated (April 4) for three and a half hours, an endurance test.


Polling a run-off between the two evenly matched candidates has Macron winning about 60 percent to 40 percent. The far right position has increased 6 points since the last presidential election (2012, Le Pen 18%) to nearly two-fifths of the electorate in a run-off, but it is still not in position to take over the French government. 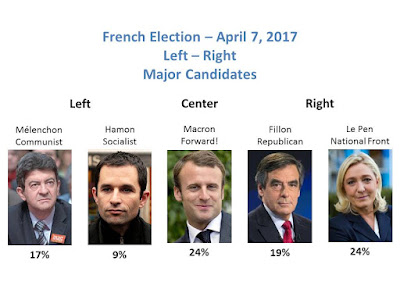 Le Pen is not the only candidate advancing an anti-EU position, but she is the favorite of the Trump administration (Steve Bannon’s position) and Russia (Marine Le Pen just visited Vladimir Putin). The anti-EU nationalists are powerful, but not yet dominant in France.

Candidates
Le Pen (48 years old) has been head of the National Front Party since 2011 and came in third in the 2012 presidential election with 18 percent of the vote behind the winners François Hollande (who won) and Nicolas Sarkozy (the former president). She has attempted to reposition the party away from its far right roots, but ride anti-refugee/immigrant sentiment.

Macron (39 years old) began his own party, En Marche! (Forward! or On the Move!), in 2016. A former investment banker and member of the Socialist Party who was in the current socialist government for two years as the economic minister. He resigned in 2016 to run for president. He represents much of the establishment from a center-left position, but claims to be independent with new thinking.

Polling
There has been some shifting among the top five candidates the last two weeks. Macron became the second-place candidate in late January 2017 and tied Le Pen about March 20. Le Pen has gained no ground since January when she held 27 percent of the vote.

Macron took second place after the collapse of François Fillon (The Republican Party – center-right) due to a scandal concerning his family on government payroll. A battle for fourth place shifted position in late March when Jean-Luc Mélenchon (Left Party and “Unsubmissive France”) moved into fourth displacing Benoît Hamon (Socialist Party).

Run-off
In the second round of voting, polling indicated that Le Pen would increase her position to about 40 percent, but lose to Macron, who would win with 60 percent. Fillon would beat her by a similar amount, if somewhat less (55% to 45%).

Hence, unless Mr. Trump’s fake news and rigged polls are at work, the favored candidate of Vladimir Putin and Steve Bannon represents a quarter to two-fifths of the French electorate and will lose the May run-off. There is still a month of campaigning, but it appears France’s two-tier electoral system is moving toward a business-oriented socialist as president.