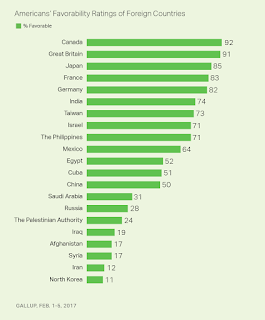 As President Trump familiarizes himself with world leaders and begins developing policies, it’s useful to examine public opinion concerning the countries’ favorability with Americans. Opinion tends to be fairly stable. The public’s views are affected by reported events and the positions of American leaders. Most of the public are only mildly interested in foreign affairs and don’t directly interact with foreign nations beyond periodic trips.

Gallup recently asked Americans to rate the favorability of 21 countries. At the top of the list were Canada and Great Britain with more than 90 percent of the public having a favorable view. In the 80 percent range was Japan, France and Germany. At the bottom were North Korea, Iran, Syria, Afghanistan and Iraq (ranging from 11 percent for North Korea to 19 percent for Iraq). In the middle range of 50 percent were China, Cuba and Egypt.

Some comments:
Check out my blog: America’s views on world leaders
Posted by Floyd Ciruli at 4:04:00 PM