Trump Could Use Immigration Reform for a Reset

Peggy Noonan, an indefatigable optimist, continues to hope that Donald Trump is going to “pivot” and get a bipartisan deal on health care. She lacks realism. Democrats won’t help Trump or Republicans pass “repeal and replace.” Trump doesn’t appear to have “pivot” in him. But, does another disastrous week lead Trump and his team to look for some action that shifts attention from tweets, Russians and health care?

Recently, we discussed immigration reform, an issue that would disarm critics, attract moderate Republicans and Democrats, and reduce deportations that will produce bad press for years. The latest CNN (ORC poll) confirms that there is a considerable upside for finding a solution to the status of undocumented residents. The public agrees with the President in deporting criminals, but rejects deporting all illegal citizens. Ninety percent of the public suggests illegal immigrants gain citizenship if they meet strict conditions. 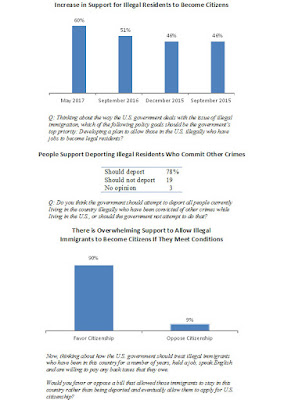 Read my blogs:
Is immigration reform possible?
The wall is a problem
Posted by Floyd Ciruli at 11:14:00 AM