Democrats and Republicans Split on Sympathy for Israel

Although Israel still receives considerable sympathy from Americans in its dispute with Palestinians (46% for Israel, 16% for Palestine), there is now a significant partisan gap in sympathy, with a 52-point difference between Republicans’ (79%) sympathy for Israel compared to Democrats’ (27%). 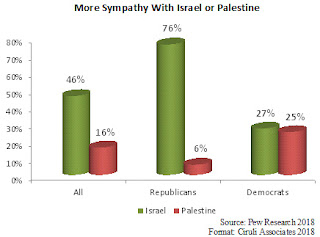 The gap began in earnest toward the end of President George W. Bush’s second term. Republicans had been consistently more supportive of Israel than Democrats since the start of the Pew Research measurement in the late 1970s. But, sympathy jumped from the 50 percent level to the 70s after 2006, especially among conservative Republicans. Support for Israel among Democrats, on the other hand, while somewhat lower, remained steady until the 2014 period, then it dropped 15 points to the current 27 percent.

The two shifts in sympathy are an example of domestic politics significantly affecting the public’s foreign policy viewpoint. Evangelical Republicans became increasingly committed to Israel’s security as the site of the biblical story during the Bush presidency. Israeli politics became much more conservative under Prime Ministers Ariel Sharon and Benjamin Netanyahu. Israeli government hostility toward the Obama administration intensified based on settlement policies and the Iran agreement. Republican political leaders welcomed Netanyahu to speak to Congress on his opposition to the Iran government without the Obama administration’s involvement in May 2015.

The Trump administration has pledged its close support for Israel’s position in negotiations with Palestinians and announced it’s moving the U.S. embassy from Tel Aviv to Jerusalem, a controversial position avoided by previous American presidents.

The new alignments are creating stress among American Jews who support Israel, but are domestic liberals and Democrats. Israel may find a much more conflicted and less supportive U.S. government when the Democrats regain control in D.C. 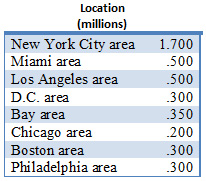