European Elections: Germany and Italy, Fragmentation and a Surging Right

Germany
Acting Chancellor Angela Merkel required nearly six months from September 24, 2017 to March 3, 2018 to form a government. Merkel was 109 votes short of a majority in the Bundestag after a weak September election result and forced to renegotiate a partnership with the also diminished Social Democratic Party (SPD).

The partnership brought many new faces forward in Merkel’s Christian Democratic Union, her associate party, Christian Social Union (Bavarian wing) and the SPD. This will no doubt be Merkel’s last term. The stability of the new coalition remains to be seen, but polls made clear the result of the fragmentation of the last election has empowered a new right party, the Alternative for Deutschland (AfD). It is now the largest opposition force, equal in support to the SPD. 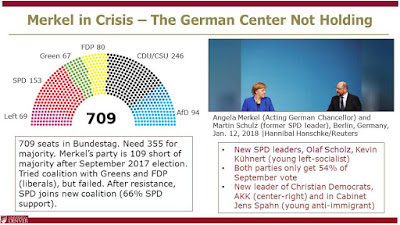 Italy
The Italian election of March 4 has also left a fragmented landscape with an empowered populist party, Five Star Movement, gaining the most votes as a single party (33%). It is led by 31-year-old Luigi De Maio. A consortium of center-right to far-right parties received the most total votes (36%) (Forza Italia, Northern League, Brothers of Italy, Us with Italy). One surprise was Silvio Berlusconi’s Forza Italia with only 14 percent of the vote, making it the junior partner with the League (18%) led be Matteo Salvini, a more anti-immigrant, anti-EU leader. Both the populist and right wing parties are more pro-Russian than the Italian establishment parties.

The center-left ruling party’s support collapsed to 19 percent. Former Prime Minister Matteo Renzi will not be a part of the new government.

Hence, the forces of fragmentation and collapse of center parties continues. Although the European establishment bought some time in Germany, Italy will now be a new southern European challenge for the EU.
Posted by Floyd Ciruli at 10:41:00 AM