The Dow Jones Industrial average hit its all-time high of 26616 on January 26, 2018. The run-up since the November 2016 election had been incredible, more than 40 percent. But, in spite of a healthy economy and continued strong earnings, volatility is up and significant market drops have become common (record drop 1557 intraday, 1175 close, Feb. 5, 2018).

The Dow is currently at 23957, or about 2600 points under the top, correction territory. Various reasons are cited for the market stall and increase in volatility. Federal Reserve tightening, a slight increase in interest rates and rumors of inflation appeared to have caused the initial anxiety. The Facebook crisis is dampening an entire sector. Now, tariffs and the President’s enthusiasm for trade wars are the reasons for drops in major Dow components. 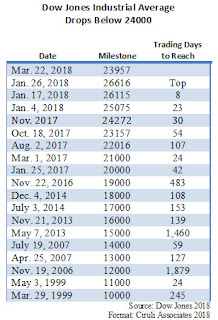 Up until now, the chaos in the White House has been ignored by investors as the positive aspects of cutting taxes and regulations were dominant. But, the politics of 2018 are beginning to undermine the Republican control of Congress and the agenda of President Trump. Investor confidence appears to have broken. Expect volatility and more downside pressure.