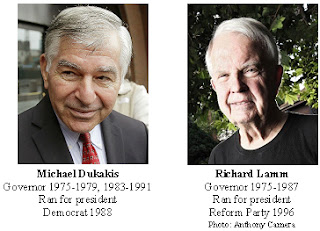 The two governors have a long history. Both were first elected in 1974 and served 12 years in their respective states, Massachusetts and Colorado. Dukakis lost the Democratic primary after his first term, but came back in 1983 for eight more years.

Dukakis was the Democratic nominee in 1988, losing to George H.W. Bush, and Lamm tried to wrestle the Reform Party nomination from Ross Perot in 1996 and lost. As Lamm points out, the Reform Party was a wholly owned Perot franchise.

Lamm was on a potential list to be in the Dukakis cabinet and Dukakis was a jacket endorsement of Lamm’s 2013 book, “Brave New World of Healthcare Revisited.” They both went into teaching – Dukakis in Northeastern and UCLA (he likes the winters) and Lamm at DU (he just retired).

Both are notoriously gloomy about national debt and the ability of the political leadership or even the American system to act responsibly. Dukakis tore after the Republican tax reform as fiscally irresponsible at his DAC talk, and Lamm is famous for railing on the failures of the health care system.

Here are the differences:
Dukakis is far more the Democratic Party reformer and Lamm the dreamer of a third-party or independent candidacy. Dukakis revels in his Greek ethnic identity and believes we should welcome more immigrants. Lamm is the old zero population growth adherent and thinks we should keep the borders tight and immigrants assimilated.