They are following the national distinctions between the parties, but with a slightly more restrained approach among Democrats given the state’s reputation as more gun friendly and the 2013 recall backlash on new gun laws. Peter Roper in a Pueblo Chieftain quoted me and polled the candidates on their proposals.


Floyd Ciruli, whose Ciruli Associates polls are among the must trusted in Colorado, said the continuing tragedies of mass shootings has moved the public's opinion on gun control, but not the political leadership.

"Nationally, the support for specific gun-control measures tends be around 60 percent or higher, but the political lines haven't budged much at all," Ciruli said. "Politically, the gun question is still considered to be very controversial, especially in swing districts."

Most candidates mentioned mental health. The following are highlights recorded by Roper. 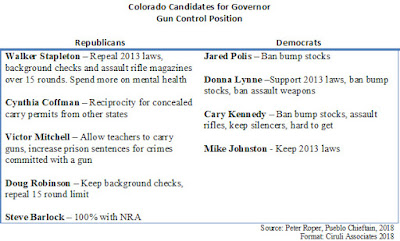