1968: A Year of Turmoil and Transition. Where Were You?

The Denver Press Club is hosting a presentation and panel titled, “1968, A Year of Turmoil and Transition,” on May 8. Nineteen sixty-eight was the year the Baby Boomers came of age. The oldest members of the cohort were 22, four years out of high school, four years into the draft, the music, the drugs, the Pill, the attitude about authority.

What were you doing? It’s time to remember what you were doing when you heard the big events and what did it mean to you. Leave a comment below or #1968Remember on Twitter. The list will be published and some used in the panel.

I use the following chart in my Korbel School class on Public Opinion and Foreign Policy. The Vietnam War was the event that made public opinion critical in foreign policy decision-making, witnessing President Lyndon Johnson announcing on March 31 his bombing pause and decision to not run for re-election. Opinion was turning against the war and especially against him.

The list is just a brief selection on the events of the year, many of them accompanied by great acrimony and violence. 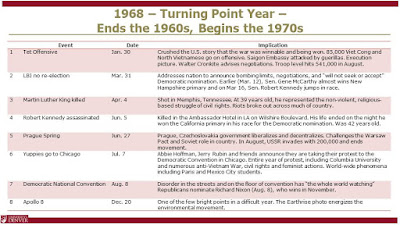 Leave your memories in the comment section or #1968Remember.