Colorado Politics: Will a Wave From D.C. Wash Over Colorado?

The recruiting is mostly done, the fundraising is well underway and the campaigning, especially in competitive districts, has started. The table is set for the fight for the U.S. House of Representatives.

History of midterms for a new president is not good, and the early indicators for Donald Trump are not good. In a commentary for Colorado Politics, the state’s leading political website, I examine the possibility of a wave coming out of Washington in favor of the Democrats that could roll over not only the most vulnerable Colorado federal official up for re-election, Mike Coffman, but the Republican ticket from governor down to the state legislature. I also describe the national dashboard, a snapshot of indicators as to the direction of national politics. Colorado Politics published “Will a wave from D.C. wash over Colorado?” on March 23, 2018.

The ever controversial Nancy Pelosi now only needs 23 more Democrats to win control of the House after the victory in Pennsylvania’s 18th District. Although it is clear that her time as head of the Democratic caucus is nearing a conclusion, she remains a powerful force. Democratic candidates in swing districts can get political mileage by denouncing her as Conor Lamb did to help him win the Pennsylvania House seat, yet still take money from the Democratic Congressional Campaign Committee (DCCC), which she helps fund. Read more… 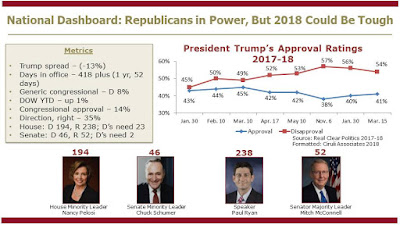