Since the school shooting in Parkland, Florida, polls appear to reflect a decline in support for the National Rifle Association (NRA) and an increase in support for more restrictive gun laws.

The Gallup poll has queried public favorably toward the NRA since 2000. In fact, during the Obama administration years, the NRA’s reputation improved, with more than half the public giving it a favorable rating, But, a few polls during the last few months show a decline.

In a national Marist poll in early March 2018, only 38 percent were favorable toward the NRA, with 51 percent unfavorable. Sixty percent believe the NRA has too much influence over politicians and 54 percent believe Republicans in Congress are afraid of the NRA (Quinnipiac University poll, March 2018).

The standard question that the Gallup poll has asked for many years shows a significant spike upward in Americans who support more strict “laws covering the sale of firearms.” As of March of this year, after the Parkland shooting, an all-time high of 67 percent of the public support the “more strict” position – much higher than in December 2012 after the Newtown, Connecticut shooting (58%). 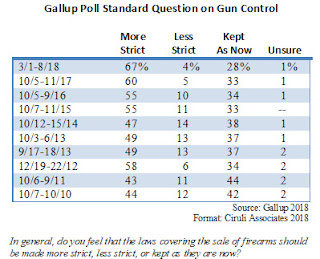