The new White House team being assembled by an energized Donald Trump (more comfortable after a year into his presidency) looks like a Fox News casting call. If you like conflict as the President obviously does, this is your crew. The new members – Bolton and Kudlow – have an advantage no members of the first White House staff enjoyed – Trump sees them regularly on Fox News and CNBC. He recognizes them and hears their voices defending his policies and his behavior. Another Fox News contributor, Joseph diGenova, almost made the new team, but was out at the last moment. 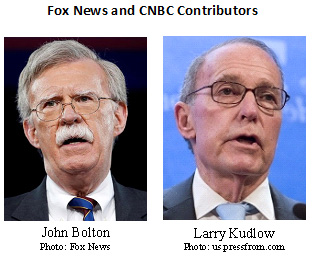 Being good on TV is the way to get into this White House. But, a TV talking head may not be good for White House policymaking.


Trump may not be in office long enough, but these men could easily migrate to State and Treasury. Confirmation hearings would be interesting.