One hundred and fifty WorldDenver guests joined a presentation on April 10 by Ambassador Christopher Hill and professor and pollster Floyd Ciruli on the topic of: The New Authoritarianism: Can America Meet the Challenge? Americans, especially people interested in foreign policy, are extremely concerned about the state of democracy, including in the U.S.

One of the evening’s topics was that trade, such as the Trans-Pacific Partnership (TPP), not only supported the member countries’ economies, but aided the functioning of their democratic decision-making and collective security arrangements with the U.S. The TPP agreement was especially seen as a counter to China’s aggressive economic initiatives in Asia.

President Trump opposes multi-lateral agreements, and during the campaign, was especially critical of TPP. He withdrew the U.S. from the TPP negotiating process as his first executive order. Trump believes the pact hurt American workers and businesses. He prefers bilateral agreements and claims agreements with six are underway.

The eleven countries that were partnered in TPP have proceeded forward without the U.S. and have a signed agreement (less robust), waiting approval by their individual governments. A number of additional countries want to join, such as South Korea, Taiwan and the Philippines.

But two days after our presentation, the President realized his trade war was costing him support among farm state interests and senators and ordered his new head of the National Economic Council, Larry Kudlow, to examine a U.S. role in the TPP as an effort to promote American products. He also needs allies in Asia for his trade initiatives against China. Japan has especially been interested in America rejoining the agreement.

Dealing with the impact of trade agreements, especially with Asian economies on American jobs, is still to be addressed, but the benefit of allies is beginning to look especially important to the administration. Trade agreements not only benefit the economy, but diplomacy and national security. 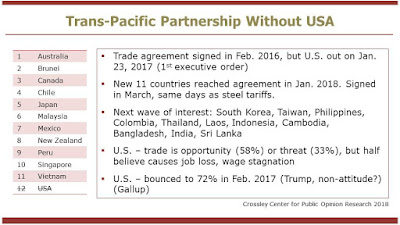