The intense media attack on China for its early behavior related to COVID-19 by the Trump administration and the equally fierce counterattack from China was a major topic at the May 14 Zoom conversation, “China, the U.S. and Global Leadership in the Pandemic,” with professors Suisheng Zhao and Floyd Ciruli of the Korbel School, which attracted more than 100 participants.

Since the session, the blame game has become even more heated between the major powers and has received considerable coverage in the media. WHO was the latest forum for the fight during the last two weeks. President Trump delivered a four-page ultimatum to cut off funding due to the organization’s lack of “independence” from Beijing. China, for its part, has been aggressively counterattacking through its diplomatic corps and in social media claiming the U.S.’s incompetent handling of the virus is an indictment of both Trump and the failed U.S. system.

It is an important issue domestically in both countries. China, as it convened a delayed annual meeting of its National Congress, is highlighting the narrative that the party and leadership managed the virus effectively and it’s under control. In the U.S., China bashing has become part of the presidential campaigns, with Republicans spending millions on advertising the message that China was responsible for the virus, covered it up and that Joe Biden is weak on China. People who oppose Trump, such as the Lincoln Project, have a devastating ad titled “Mourning in America” that ties Trump to the virus mismanagement and the tragic result. Biden and the Democrats argue, of course, Trump is the problem and that he has been President Xi Jinping’s biggest booster. 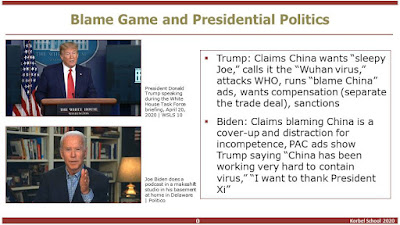