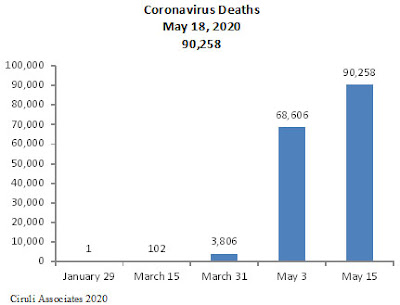 The Tension
A major fight has broken out over the best; i.e., safest and fastest, strategy to lift the stay-at-home and essential business orders. President Trump, seeing it as a way to revive his flagging campaign and focus on the economy as the narrative he runs on, has been encouraging states to rapidly reopen, supporting protests, and criticizing governors and health officials (Dr. Fauci), who he believes are too cautious.

Although there is a constituency for his agitation, it’s modest, and his offhand references to safety are drowned out by his blunderbuss economic cheerleading. Although the states are opening at a variety of rates, most are taking a slow, phased approach watching infection rates and hospital utilization.

The growth of victims in New York City has slowed and represents 31 percent of the national total. The next 9 states represent 37 percent, and many haven’t slowed yet (68% total). The remaining 40 states represent 32 percent of total deaths. Changes in these proportions will be an indicator of the application of caution and best practices in the states as they open for business. 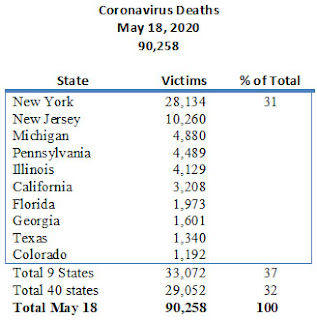 Unemployment
Unemployment claims continue to climb as 2.9 million filed the last week, increasing the total filings since March to 33.5 million. The latest Wall Street Journal survey of economists from May 8-12 reported an expected unemployment rate in June of 17 percent, up from the April 14.7 percent reported last week. The economy, as it enters a second quarter of downturn, is approaching nearly twice the slowdown of 2008-10. Many economists believe the unemployment rate is more accurately 20 percent.

The economists agree with our blog observations of a slow “Swoosh” shaped recovery. Federal Reserve chair, Jerome Powell, who earned an “A” from 72 percent of the economists for his early monetary actions (interest rates to near zero, purchase trillions of government debt and loans to American businesses) said on Wednesday, May 13:

“There is a growing sense the recovery may come more slowly than we would like…and that may mean that it’s necessary for us to do more.”

He implied another major spending bill was needed. The House of Representatives just passed $3 trillion package for states and local government and other programs with a slim 9-vote margin. The bill is opposed by Majority Leader Mitch McConnell and President Trump. But, expect the May unemployment report released in June to be very painful. Trump and the Republicans are going to start looking for political cover. 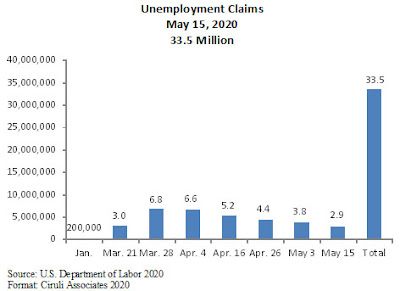