Colorado is beginning to open up its businesses. The media is covering the uneven lifting of restrictions due to different state and city rules, along with a few outlier businesses opening on their own timelines and rules. Protests of the regulation have received coverage. But, public opinion polls – both nationally and in Colorado – tell a different story, one of a broad consensus on safety first and only then relaxing the rules.

Open and Close
The majority of the public still support restrictions with just a modest shift in the last few weeks toward fewer restrictions. 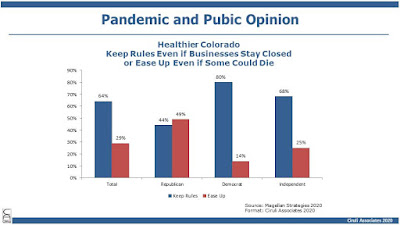 Although like nearly everything in America, there are partisan differences. Republicans are closely divided in Colorado, with 44 percent preferring keeping rules and 49 percent wanting to ease up. Democrats (80%) and independents (68%) are in favor of keeping rules. The Colorado poll reported in the Denver Post was done in April online.

Masks
Another Colorado poll also done online in May reports 78 percent of Coloradans support masks in stores and workplaces. It had bipartisan support, with 68% Republicans and 87% Democrats in favor (Keating Research, 5/1-5/3).

Confidence in Information
Magellan also reported that only 29 percent of Coloradans trust information on the virus from President Trump versus 50 percent who say they trust Governor Polis.
Keating’s poll states Polis’ approval rating went up from 50 percent last fall to 66 percent today.

Lifting Restrictions
David Brooks, in his New York Times commentary reprinted in the Sunday Denver Post Prospective section, agreed that America is less divided than we seem online or between our partisan cable news shows. Indeed, the Keating poll indicated that 68 percent of Coloradans supported Polis’ “safer-at-home” phase easing of restrictions. Interestingly, more Republicans supported it (75%) than Democrats (63%). Republicans probably liked the relief and opening up of businesses and the Democrats the continued emphasis of health rules.

Of course, polling is a snapshot of opinion, and in a fast moving political environment, it will shift. But for now, neither Coloradans nor Americans are ready to ignore science-based recommendations concerning their health.
Posted by Floyd Ciruli at 3:52:00 PM