China’s Delayed Congress Meets May 22 – Sign All is Well?

After a two-month delay, the National People’s Congress’s annual meeting of political and business elites will start on Friday, May 22. It represents a risk to assemble several thousand of the country’s top leaders in Beijing, but it signals China wants the narrative to be that it managed the virus and is back to normal.

President Xi’s and the leadership’s handling of the coronavirus will be the lead topic as it is a part of the global public relations effort to counter criticism and assert China’s growing global strategy.

But, the economic rhetoric and plans will be critical. President Xi Jinping has recently placed more emphasis on restoring jobs and less on growth projections. That’s partially a reflection that the economy has contracted more in the first quarter than since Mao died in the mid-1970s. The credibility of his leadership and the legitimacy of the party are at some risk.

Also, the reports and conversations on Hong Kong will be watched closely. Hong Kong has mostly exhausted the central government’s patience due to riots, parliamentary disruption and the damaged economy. China argues sovereignty is threatened and national security. It alleges interference from the U.S. Also, a surge of nationalist fervor is affecting China’s rhetoric and possibly the substance of the relationship. Expect tighter control.

Chinese leaders have been wearing masks. How many actually show up versus teleconference will be a sign of the risk assessment. Upwards of 5,000 participants and associated interests could show up for the Congress and the parallel meeting of the party’s political advisors at the Chinese People’s Political Consultative Conference. 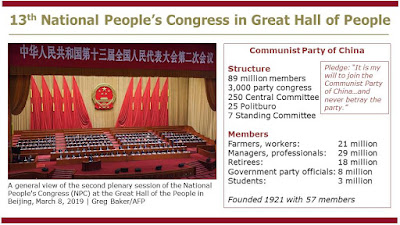