Open for Business and Living With the Risk

As America and much of the world attempt to shift out of shelter-in-place rules, the number of deaths continues to rise. The U.S., at 71,260, is now nearly 50,000 more fatalities over its total on Easter of 22,000 (April 12). The Trump administration wants to shift the narrative from the Task Force, which President Trump has abandoned to focus on the economy, with him cheerleading the openings.

There has been a shift in the rank order of top nations in number of fatalities. Brazil is the first country south of the equator moving up rapidly in the number of deaths, most recently overtaking Germany, Iran and the Netherlands. President Jair Bolsonaro, who has resisted the lockdown, is famous for calling COVID-19 a “little flu.” The United Kingdom, another country slow to shelter-in-place, has now overtaken Spain and Italy as its losses approach 30,000. Prime Minister Boris Johnson is also promoting the start of economic activity. 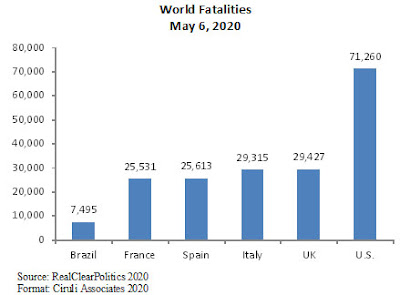 After six weeks or more of lockdowns in most developed countries, the pressure to restart lives and economics is irresistible, but the risk of a second wave of infections is great. U.S. medical authorities suggest the death total could climb to 130,000 by June if the public doesn’t adhere to good separation and hygiene rules. Masking or no masking is the new flashpoint between the risk adverse and the “let’s just live with it” crowd. In any event, the new normal will be very different than the recent past.