Chinese Foreign Minister Leader Wang Yi, who leads the new aggressive propaganda-oriented “Wolf Warriors,” warned that America is pushing the two countries to a Cold War. He referenced President Trump, Secretary Pompeo and American domestic hawks as making hostile attacks against China and proposing sanctions and punishment related to the COVID-19 epidemic. He brought up the ubiquitous “century of humiliation” and China’s defense of its sovereignty and dignity. He specifically cited Taiwan as a red line issue. 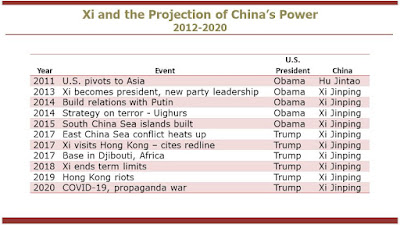 President Xi, the Foreign Minister and party apparatchiks argue that the correlation of historic forces are driving China’s inevitable destiny to rise and the U.S. to weaken and any effort to resist China’s move toward their global role is doomed to fail.

But the advent of the emerging Cold War is less a product of the old communist doctrine of inevitable forces and more a product of China’s decade-long aggressive reach for global power using both hard (i.e., military build-up, South China Sea expansion, Hong Kong  intervention) and soft means (i.e., Belt and Road, gifts of masks, two billion dollars to WHO).

The strategy is a product of President Xi and his politburo team that started early in the last decade with reform, rebuilding and politicization of the military and has evolved into a major effort to change the geopolitical landscape in the Far East and diminish the U.S.’s and Western democracies’ influence worldwide. The leadership at Party Congress in 2018 affirmed Xi’s ascent and made clear they believe the West is dispirited, divided, distracted and withdrawing.

Regardless of what it gets called, it’s a Cold War.
Posted by Floyd Ciruli at 1:18:00 PM