President Vladimir Putin’s favorite overseas trip in recent years has been to the annual Munich Security Conferences where he regularly complains that Western Europe and the U.S. have had policies that encroach on Russian national interests and harm its economy. President Xi Jinping favors the world economic forum in Davos, Switzerland, where he proclaims his commitment to international rules and organizations. President Donald Trump doesn’t relish travelling abroad, and when he does, he trumpets “America First” and complains of ill-treatment by allies, international organizations and others.

Putin doesn’t particularly court either elite or world opinion. Xi appears to want to woo both with his aspirational statements and massive propaganda machine. Trump goes out of his way to outrage both with statements, policies and personal behavior.

None of the three leaders are popular in world opinion. But Xi wants to be. Yet, his nearly decade-long rule has not raised confidence in his leadership around the world. Pew Research reported a 2019 33-nation survey that showed only 28 percent of the national public (median) had confidence in him. His highest ratings were in Russia, Philippines, Nigeria, Kenya and South Africa (above 50%).

In an April survey Pew Research conducted in the U.S., the public’s confidence in President Xi dramatically collapsed from 2018 and 2019, dropping from 39 percent to 22 percent in “confidence” with “no confidence” jumping from 50 percent (still high) to 71 percent. While Republicans tend to be more negative toward President Xi, both parties have lost confidence in him.

Hence, Xi, with a huge decade-long public relations effort, has attracted very few to see him favorable at a moment when his party and country are facing considerable criticism for a large number of controversial policies, most of which he has directed. 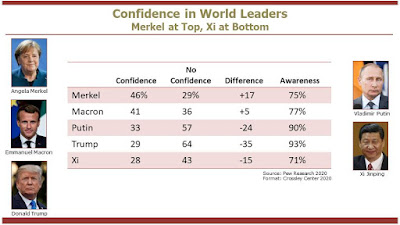