In one of the strangest election years in American history, the post Memorial Day summer campaign season started with a bolt. Typically, an incumbent president plans his coronation and the opposition keeps working to unify his or her party and raising money. Instead, in an unprecedented historical moment, the White House is surrounded by the regular army, and all four former living presidents of both parties have criticized their predecessor.

Rose Garden to Road Show
At the start of the pandemic, President Trump first used a Rose Garden strategy with the Coronavirus Task Force and then switched to a mostly road trip strategy to battleground states, all the while maintaining an active Twitter feed. Trump “being Trump” wants 20,000 delegates at his convention, which has led to a fight with the governor of North Carolina, who isn’t certain August will be the time to assemble a screaming crowd. Trump’s latest shift to law and order rhetoric in the face of a national convulsion on race relations, has him locked in the White House with limited travel and facing a torrent of criticism.

Front Porch to Basement
Joe Biden, the presumptive Democratic nominee, is using a pandemic-modified front porch strategy. He’s in his basement and talks to visitors on Zoom and conference calls. He still needs to win his nomination and pick his vice president. In spite of the fast breaking news cycle that has been a challenge for him to keep up with, Biden has taken the polling lead.

Numbers Don’t Add Up
Trump knew a popular vote win was a stretch given his four-year record of seldom breaking 45 percent in approval, but due to the strong 2019 economy, soaring stock market and record-low unemployment, he had a chance. The pandemic ended that, and unless Biden suffers an historic collapse, Trump’s strategy is now to repeat the 2016 strategy of winning in the Electoral College; that is, to eke out wins in the battleground states he won four years ago and possibly pick up a couple more.

Unfortunately for Trump, as of June 5, the numbers don’t add up to his popular vote in 2016 when he got 46.1 percent of the vote, but was still beat by nearly 3 million votes by Hillary Clinton, who received 48.2 percent. He currently only has 43 percent in approval (54% disapproval), which is one point ahead of the head-to-head face-off with Biden (42% Trump to 50% Biden). Trump is now 8 points down, a recent record. The Republican Party has only 41 percent in the generic ballot test. 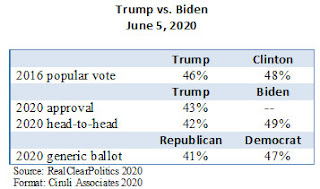 Base is Not Enough
Trump’s friends and campaign advisors have repeatedly tried to contain his personal peaks of anger and focus him on taking advantage of opportunities to be presidential; that is, reach beyond the “base.” The polls reflect the strategy and have never awarded him above a 50 percent approval. But, Trump feels acting presidential is a detriment to his independent, anti-establishment image. He articulated his strategy in a speech in New Hampshire in 2019 when he said regardless of what you think about me, “love me or hate me,” you “have no choice” as the market will collapse, “your 401k’s go down the tubes.” With 110,000 deaths and 13 percent unemployment, Trump must argue that “only I can revive it,” but not until 2021.
Posted by Floyd Ciruli at 3:29:00 PM