China’s People’s Congress announced a policy position that affirmed what many believed: Hong Kong’s democratic features inherited from the British handover in 1997 are tenuous and potentially short-lived. The one country, two systems, was to last until 2047. But, a very viable sign of China’s limited tolerance of Hong Kong’s special status was President Xi Jinping’s 2017 visit for the swearing-in of Beijing-favored Hong Kong Chief Executive Carrie Lam. He made clear that Hong Kong’s activism on voting issues and democratic governance was considered a threat to the central government’s control, to the party’s legitimacy and to national sovereignty. His most high-profile activity during the visit was to assemble and review the garrison, making unsubtle statements that China’s military is available for deployment. 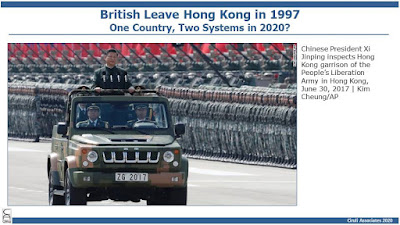 Although the new laws are still in drafting, “State security agencies” will now be used in Hong Kong as needed to fight separatism, subversion, terrorism and foreign interference (i.e., U.S.). The Chinese legislature will be able to draft laws related to so-called national security, which state security could enforce without Hong Kong’s approval. Chief Executive Carrie Lam said she will cooperate with the effort.

Although the ultimate legislation may still leave considerable authority in the Basic Laws of Hong Kong with its independent legal system and democratic features, its promulgation will likely produce more reaction from local activists and more opposition from the U.S. and many western countries.

Most importantly, the shift in China’s approach to Hong Kong ends the long abandoned view in the West that China was evolving to tolerate some level of democracy with its dissent and independent legal system as reflected in its claimed territories, such as Hong Kong and Taiwan. It also reinforces that President Xi is the major driver of the shift to intolerance of autonomy.
Posted by Floyd Ciruli at 12:51:00 PM