Race and Policing: The Incredible Speed and Spread of Black Lives Matter Movement

The speed of the rise of the Black Lives Matter movement with accompanying demonstrations and policing proscriptions has been unprecedented. In a few weeks, it has shifted American opinion toward agreement with a host of what have been very controversial opinions about racism in America, concern about police behavior and support for protesters. (See opinions in chart below.) In Colorado, police reform legislation passed in days instead of the usual weeks, months or if at all.

Along with the speed has been the spread of the movement across the country, from urban centers, to suburbs, to resorts, to small rural towns. An assessment of the pictures of demonstrators shows a diverse group, with more whites than blacks, and mostly young. Also, the remedies being considered, and in some cases adopted, are dramatic, from defunding the police, to ending chokeholds, to much greater sanctions for problem police officers. 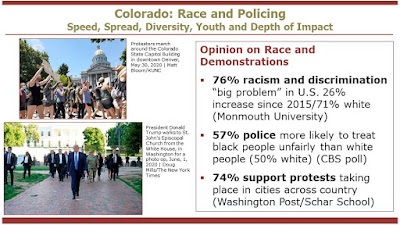 In recent years, some very stable-appearing public opinions have shifted with unexpected speed. For example, gay rights and marijuana use had minimal support through the 1990s, but in this century, rapidly became majority opinions.

Support for gay marriage reached half the American population in 2011 and is now in the mid- to upper 60 percent range. Prior to that, it tended to be in the 20 to 30 percent range. Many factors played into the shift as it approached 50 percent, but it was in 2012 that President Obama first breached support for the concept and provided major boost. The public views on legalization of marijuana use were equally confined to a narrow range of support – not more than a third until 2009. Today, only about 10 percent of the public believe it should be illegal under all circumstances.

One similarity for both gay marriage and legalization of marijuana is the acceptance by Millennials and Generation Z well above the average. They are also the vanguard of the current civil rights protests and backbone of the new public opinion.

Polls show they are the most concerned segment of the population about racism and discrimination, police behavior and support for the protests. As they have become the largest cohort of U.S. population, superseding Baby Boomers, their opinions increasingly come to dominate. The Black Lives Matter movement had modest support, mostly among Democrats and Blacks, in recent years, and now has 53 percent support in an online poll reported by the New York Times, with 67 percent from people under 35 years old.
Posted by Floyd Ciruli at 1:22:00 PM