For example, at the bottom of the list of favored leaders are Vladimir Putin, Kim Jong-un, Raúl Castro and Xi Jinping. Claiming any one of these people a good friend and ally will be a lift.

The public loves the Queen and the Pope. They have a few detractors, both to the office and the person, but very few. Starting fights with them will be costly.

Many people don’t know Angela Merkel or Theresa May, but due to old alliances and respect for their actions, they have more than two-to-one favorability among the attentive public. 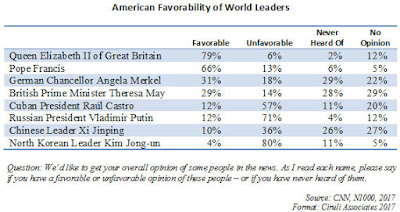 Donald Trump has a 44 percent favorability rating, higher than the mean of the eight foreign leaders. However, with near universal awareness, his unfavorability rating of 53 percent is near Raúl Castro’s.
Posted by Floyd Ciruli at 10:01:00 AM