A dark, uncompromising speech that began with an attack on the Washington establishment across the board:


“For too long, a small group in our nation’s capital has reaped the rewards of government while the people have borne the cost. Washington flourished, but the people did not share in its wealth. Politicians prospered, but the jobs left and the factories closed. The establishment protected itself, but not the citizens of our country…That all changes starting right here and right now because this moment is your moment. It belongs to you.”

It offered a dark vision of American carnage:


“But for too many of our citizens, a different reality exists: mothers and children trapped in poverty in our inner cities; rusted out factories scattered like tombstones across the landscape of our nation; an education system flush with cash, but which leaves our young and beautiful students deprived of all knowledge; and the crime and the gangs and the drugs that have stolen too many lives and robbed our country of so much unrealized potential.

It then provided an intense nationalism that closes borders and puts America ahead of everyone else:


Every decision on trade, on taxes, on immigration, on foreign affairs will be made to benefit American workers and American families. We must protect our borders from the ravages of other countries making our products, stealing our companies and destroying our jobs.”

Finally, to implement the vision, it required the full attention the all-sacrificing leader:


“I will fight for you with every breath in my body and I will never ever let you down. America will start winning again, winning like never before…The time for empty talk is over. Now arrives the hour of action.” 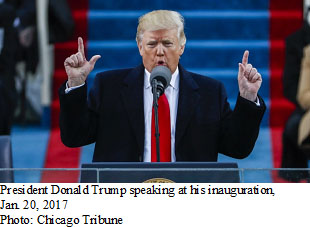 Though it ended with patriotic sentiments of national unity, it was generally a tightly crafted statement of 2017 populism and economic nationalism that Bannon and Miller ascribe to. The speech was immediately seen by the European right forces as a manifesto that speaks to their movements.

The Trump administration represents significant change. With the new cabinet designees, aggressive White House staff and the inaugural direction, the Washington establishment on both sides of the aisle should hang on.