PAPOR – The 2016 Election: What Happened and What’s Next?

PAPOR, the Pacific Chapter of the American Association for Public Opinion Research, organized a panel at its recent annual conference on the 2016 election and what’s next for public opinion polling.

As the chair of the panel, I took on the trend of populism in Western democracies and the specific impacts of it on the 2016 election.

Also joining the panel was Jill Darling, the lead researcher in the controversial experimental poll conducted by the LA Times and USC, which consistently said Donald Trump would win the overall vote, and Sarah Cho, representing SurveyMonkey, which published dozens of polls with NBC and on its own during the election based on their massive database and non-probability methodology. Their last survey had Hillary Clinton winning by 6 points.

Both of these talks focused on the why of the election results, but also on the usefulness of the data they collected.

Finally, David Kordus, a researcher with the state’s best-known research think tank, the Public Policy Institute of California, pointed out that although Clinton swept the state, there were still 4.5 million Trump voters and that data from their numerous statewide polls provide an in-depth database on the Trump phenomena in some places outside the rust belt.

Links to their presentations will be available on the PAPOR website. I will be publishing blogs and articles on the election and polling challenges and practices. 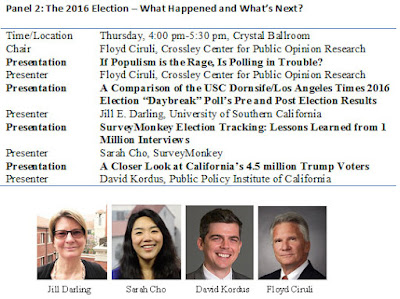