The first eight weeks of the transition to the Donald Trump administration has caused major upheaval in Barack Obama’s Asian foreign policy initiatives and turmoil with even longer-standing diplomatic and treaty understanding.
Earlier this year, residents of the region were asked if their country “was in a military conflict with another country, do you think the U.S. military would defend or not defend” them. 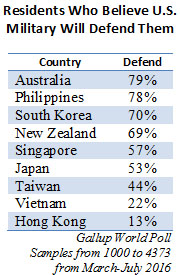 South Korea, among the most threatened nations in the Asian Rim, is also among the most confident the U.S. will defend them (70%). Philippine President Duterte has decided direct China negotiations about territorial disputes without U.S. involvement is a better strategy, but his constituents believe the U.S. would support them militarily (78%). Two of our allies most dependent on the U.S. deterent and military commitment – Japan (53%) and Taiwan (44%) – have populations clearly divided in their sense that the U.S. would defend them.

It will likely be considerable time before the turmoil subsides and a new equilibrium of relationships with the U.S. and China is established. Public opinion will only then come to reflect the new reality.