Can You Feel the Global Power Shift?

Chinese President Xi will lead a group of mega-millionaires and billionaires from his communist-controlled country to the Davos World Economic Forum, a think tank of capitalism. He will argue for globalism and against protectionism. Of course, at home he is intensely nationalistic and China has a myriad of protectionist practices, but still he is now a world spokesperson for globalism. Mostly Xi is looking for allies against America’s pending anti-China position. Also, his presidency is up for renewal this year and President Xi is looking for some international prestige.

President Vladimir Putin will not attend Davos and continues to try to be the leading spokesperson for anti-globalism, nationalism and defending the Christian West against radical Islam.

Trump, who will be sworn in the last day of the Davos conference, sides with Putin on globalism, a shift from the the U.S.’s post-World War II positions, and against the positions of most of America’s historic allies.

Attending Davos will be Secretary John Kerry, who most likely considers Switzerland his second home, and Vice President Joe Biden.

Given the momentum of anti-global populism in the developed world, the World Economic Forum no doubt welcomes China’s high-profile advocacy. But, the champagne will not be flowing at the 2017 Davos conference. 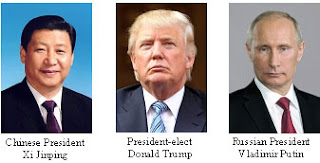