America Right on the Move

In four years, Donald Trump has become nearly a cult leader of the American far right. An examination of his speeches, tweets and behavior is a textbook instruction on organizing a right-wing political movement. The effort weaves together three important political themes: populism, or defending ordinary people’s interests against the elite, which often needs a strong leader to successfully espouse; nationalism, loyalty to nation above other nations; and authoritarianism, submission to an authoritative, strong leader. Among the communication and organizing themes and tactics are:

Civilization Threatened
The anti-immigrant strategy was good politics in the 2016 Republican primaries and a key part of the general messaging that Western values and civilization are threatened by outsiders. Close the borders and keep out the “other.” (Populist slogans, nationalist themes)
Sovereignty
In policy and numerous speeches, sovereignty is praised, especially at the UN, Trump declared that each country should serve its own interests. It led to opposition to multilateralism, including the UN, but also criticism of U.S. alliances like NATO. He believed alliances are costly constraints. The slogan “America First” sums it up. (Populist slogans, nationalist rhetoric, authoritarianism) 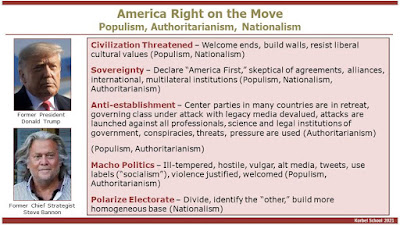 Anti-establishment
Beginning with the inaugural address references to Washington elites taking advantage of the people, anti-establishmentism continued through draining the swamp and the endless attacks on legacy media, Trump regularly used populist rhetoric to target institutions and individuals that constrained him and critics and opponents. He conducted generalized attacks on professionals, scientists, military leaders and legal institutions. He removed critical administrators, whistleblowers and inspector generals. (Populism, authoritarianism)
Macho Politics
Trump’s language and actions are ill-tempered and hostile. He’s a master in the attacks and weaponized social media. He favors rallies and revels in chants: “lock her up,’ and “build the wall.” Violence is often rationalized and even welcomed. (Populism, nationalism, authoritarianism)
Polarize Electorate
A key strategy is to divide the public and focus affection on that segment that supports him and his agenda. The outsiders are identified, disparaged and isolated, if possible. (Nationalism)

In the end, the movement blended some establishment Republicans, many average Americans, especially in the white working class, and some extremist groups. How long it lasts as a political movement may depend on Trump’s ability to inspire and manage it, but the elements of populism, nationalism and authoritarianism are always present.