Impeachment Has Narrow Majority, But Seen as Important

In 1974, a group of Republican Senators told Richard Nixon they couldn’t guarantee 34 votes to stop conviction and that he should consider resignation. He did. His support with the public had also collapsed, even after winning a landslide reelection in 1972.

In the most recent impeachments, Republicans have been avoiding the substance of the articles and arguing a technicality. The first impeachment of Donald Trump never garnered much over 50 percent public support, but it was considered intensely important by many to draw a line around unacceptable political behavior. Most Republican defenders thought the behavior was outside the rules, but didn’t rise to impeachment, and in any event, an election was 10 months away. Now a year later, he has been impeached, and today, many of those same Republicans are arguing his behavior was irresponsible and dangerous, but since he lost the election and is out of office, impeachment is not constitutional (or needed). Of course, behind their strategy is the fact impeachment is political and Trump appears to still retain considerable ability to reward, or at least punish disloyalty. 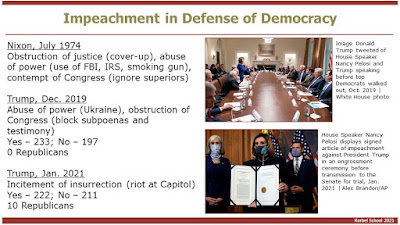 Current polls indicate, as in January and February 2020, impeachment overlaps the polarized fissures of American politics, with Democrats strongly in favor, Republicans ferociously against and independents divided if leaning toward conviction. Several recent polls show about half the public favors impeachment (56%), conviction (52%) by the Senate, and more popular, banned from holding future federal office (57%) (Monmouth). 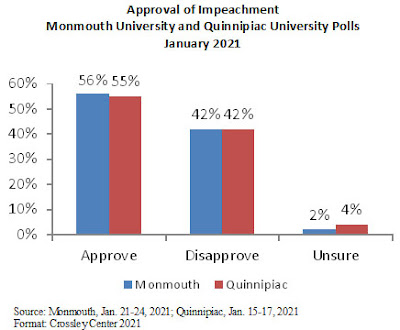