The Trump and Biden First Appointments

At the Crossley Center’s session comparing the Trump and Biden first weeks (February 9), Professor Chris Hill and Professor Tom Cronin opined on the top personnel of the respective administrations.

A comparison of the first teams of former President Trump and President Biden offer some dramatic contrasts, largely borne of the chaotic transition of Trump in 2016 and his impulsive methods of selection. As Tom Cronin said, “It is unlikely Trump had more than a brief familiarity of many of the selections. And, they are mostly outsiders.” Of the seven top positions shown below, only Steve Mnuchin made it all four years in his original position. Mike Pompeo went the distance, but switched to State after Rex Tillerson was unceremoniously removed by Tweet in March 2018.

Nikki Haley managed to leave without controversy and showed some modest independence from the White House, but was largely ineffectual due to Trump not actually believing in the UN’s purpose.

We all recall the travails of Jeff Sessions after he recused himself from the Russian investigation. He resigned under pressure (Nov. 2018). Trump then dedicated considerable attention to ending his political career. 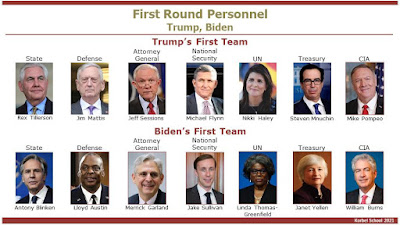 Jim Mattis made it longer than most expected – longer than Tillerson and Sessions (Jan. 1, 2019), but it was clearly painful at the end. He joined nine other Defense Secretaries in January of this year declaring the election was decided and the threat to the transfer of power should stop.

The most infamous person on the team was Michael Flynn, who lasted slightly more than three weeks until he had to resign due to misleading about the nature and content of conversations with the Russian ambassador. From the shortest term in the job’s history, Flynn went on to a lengthy high-profile legal battle with the Justice Department, finally securing a pardon from Trump in November 2020. Flynn joined President Trump and his attorney, Sidney Powell, after the election for discussions on how to overturn the results, including using the military.

History will fill in the story on President Biden’s team, but selection was organized and the group mostly has strong backgrounds for their positions. As Chris Hill pointed out: “This is not a team of rivals, but rather friends and colleagues. It should increase coordination and reduce leaks.”