California Presses New York as the State With the Most Fatalities

As the national death toll from COVID-19 passes 440,000, California has become the nation’s deadliest state, with a death toll of 39,000, pressing the original and still leader in fatalities, New York – 43,000. Texas (36,000) and Florida (26,000) continue fighting the surging virus with many casualties. With vaccines now being distributed, the next few months will hopefully see a dramatic fall-off in deaths. 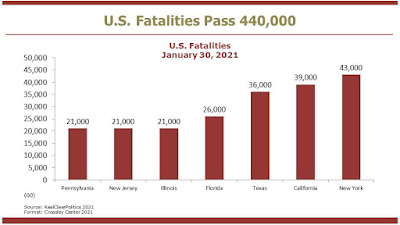 This chart was last prepared in mid-September when there were 200,000 fatalities and California was in fourth place with less than 15,000. Governors were popular then compared to President Trump. Today, for many, their popularity has fallen as difficult decisions and missed expectations have led to massive waves of criticism. Gavin Newsom is facing a recall, which if it becomes a grievance election, he’s in trouble.