The partisan gap has nearly doubled since the Nixon era. As measured by the difference in the parties’ positions on presidential approval, it is now a record high of 80 percentage points, a jump from 70 points, another record, reported during the Trump era. President Ronald Reagan, a polarizing president at the time, registered a more modest 52 point difference between Republicans and Democrats who approved of his job performance. Today with President Biden, the gap is sky-high due to the 91 percent of Democrats who approve of him and the 11 percent of Republicans who early in his term approve of his performance (several other early polls had different approval numbers, but the gap was consistently above 70 points). 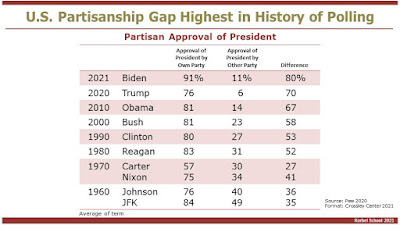 This record spread between the parties measured by presidential approval is accompanied with an increase in the intense and negative feelings about the other party and its candidates. Most voters tell pollsters that they mainly voted for their party’s candidate not because of a positive impression, but because they disliked the opposition candidate and party more. So, that about two-thirds of each parties’ identifiers voted more against Trump or Biden than in favor of their respective party’s candidate.

That reflects polls showing party members’ viewpoints that the other party will cause existential damage if it comes to power. There will be “lasting harm” if it wins and that the other party has incompatible “core American values and goals.” In other words, they can’t be allowed to retain or gain power.

Finally, the latest presidential party differences are not only intense, but they have spread down the ballot to other races, so senate, congressional and even local state races are increasingly in near perfect party alignment. And, partisan differences have spread to relations between family members, work, media selection and across political topics, such as how people see economic conditions. We are in the age of intense, negative partisan polarization.