The upcoming impeachment trial for Donald Trump will focus on the events of January 6, but the overreaching topic will be the crisis of democracy that has been ongoing. Although American democracy always faces challenges, it has been under repeated assault during the last four years. In a presentation on Feb. 3 for Boulder OLLI, “American Democracy in Crisis,” one topic was a discussion of the claims that presidential power has been abused well outside of historic norms, with some actions possibly unconstitutional or illegal reflected in the charges in the Mueller report and two impeachments by the House of Representatives. A list used in the presentation follows. 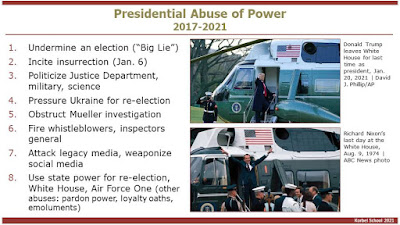 The effort to disable the transition of power, culminating in the January 6, 2021 riot, was only the most recent and dramatic White House action. The list of presidential abuse of power is large and includes politicizing the Justice Department, the U.S. Military and various agencies of science; the obstruction of the Mueller investigation; and the firing of whistleblowers and inspector generals.

The frequent attacks on legacy media and the use of social media to spread false information, foment division, attack rivals and critics reduced accountability and undermined democratic governance. Mr. Trump weaponized the White House and all the instruments of presidential power for his reelection, from staging his national convention on the south lawn, to the repeated use of Air Force One as his campaign backdrop.

American democracy held, but it is damaged and the country’s international reputation in shambles. The authoritarian behavior and rhetoric had a high cost.