California’s death toll (49,000) now exceeds historic leader, New York (47,000). Although the holiday surge appears over and vaccinations and immunity is up, most experts believe the virus and its variants will be a deadly threat throughout 2021. 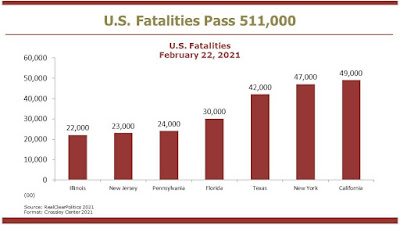 It is already a political threat with the governor of California near a possible recall election over handling of the virus. Early hero in the fight, Andrew Cuomo in New York, is embedded in a major controversy about reporting nursing home deaths.

The political danger of the virus is not a surprise. Former President Trump’s defeat in November is significantly attributed to his subpar performance in handling the virus. Joe Biden designed his campaign of medical science and empathy to specifically offer a contrast.