Marjorie Taylor Greene doesn’t support transgender equality legislation in Congress, and offices across from Marie Newman, who does and has a transgender child. They are now participating in a battle of signs and flags outside their offices expressing their views. Newman’s transgender pink and blue flag was met by Greene’s “There are TWO genders MALE & FEMALE...Trust the Science.”

A new poll captures the partisan differences among the American public on the concept of transgender identity. Half the public agrees strongly that there are only two genders – male and female – but it varies greatly by party. 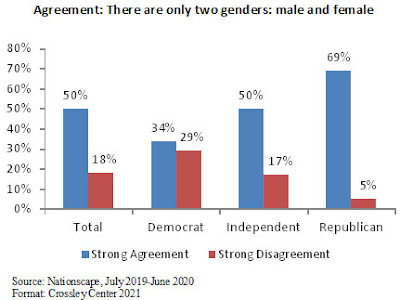 Democrats are nearly evenly divided between “strong agreement” and “strong disagreement” whereas Republicans have mostly traditional values on the issue. Will the attitude evolve in the next several years similar to acceptance of gay marriage?

There is considerable supportive messaging for transgender rights, including in the Biden administration. Also, Millennials and Generation Zs are much more liberal on gender issues and are beginning to shift public opinion.