Trump and Turnover in National Security

Former President Trump had major conflicts with several of his cabinet members and senior staff. There were six people in four years as National Security Advisors. General Flynn had the shortest term in history (24 days) and will no doubt be one of the most famous (or infamous). Two were short-term acting and three survived at least a year: H.R. McMaster, John Bolton and Robert O’Brien, who handled the transition.

Among the seven people who held the title of Defense Secretary, only two had any longevity and were confirmed by the Senate – General Jim Mattis, Trump’s first, and Mark Esper, almost his final (fired shortly after the November election). Both had strained relationships that deteriorated after leaving office. 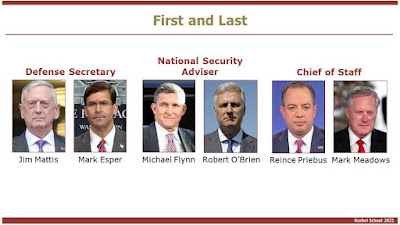 The national security jobs of Defense Secretary and National Security Adviser had to deal with both the President’s management style, for example, not caring for traditional briefings and communicating by tweets, but also major shifts in previous policy. Mattis’ final disagreement was about Syria. Esper’s relationship became strained as he resisted using the military for the law and order aspects of Trump’s re-election campaign.

Trump also had difficulty getting comfortable with a chief of staff. Not surprising since Trump was not someone who wanted orderly management. He reveled in the spontaneous, the casual and the chaotic. Reince Priebus, the head of the Republican National Committee, was his first, mostly as a nod to the Republican establishment. Priebus made it to July 2017. Former General John Kelly served for a year and a half, leaving as the relationship became increasingly strained. He departed a day after his friend and colleague General Mattis exited Defense. Trump then turned to the Freedom Caucus in Congress and selected Mick Mulvaney (moved out as COVID-19 and campaign became dominant) and finally Mark Meadows, who served during the campaign (started in March 2020) and transition. Staffing an administration and White House is never easy, but the Trump revolving door and general chaos was unprecedented in the modern era.