Americans believe the “greatest threats to U.S. security” today are U.S.-based violent white nationalists groups, eclipsing ISIS, al Qaeda and left-wing extremist groups. Only China, as a foreign power, ranks as a top threat primarily because Republicans name it as their primary threat to U.S. security. 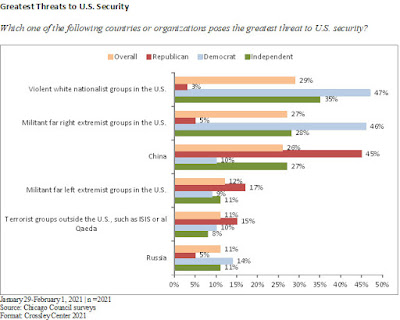 Most recently, the militant far-right groups – the Proud Boys, made famous by former President Trump in his first debate (“stand back and stand by”), and the Oath Keepers – have been most visibly identified by the FBI and arrested as extremist groups that were significantly involved with the riot at the U.S. Capitol on January 6. The President, Congress and the Justice Department (Merrick Garland) have all made violent extremism their top priority for law enforcement.