Mike Pence just received a first-hand experience of the collapse of America’s reputation among allies at the annual Munich Security Conference when he offered the standard, “I bring greetings from the 45th President of the United States of America, President Donald Trump,” and was met with deafening silence. It wasn’t the only rhetorical embarrassment the U.S. delegation received in Munich or at an earlier conference in Warsaw. The reviews from major editorials and news headlines were uniformly harsh:


Europe’s leaders are reflecting their publics. After two years of “America First” policies and Donald Trump’s often hostile conference performances, America’s reputation is in tatters. The Country’s soft power, accumulated since the end of WWII, has been squandered.

Favorable views of the U.S. have declined dramatically with German and French publics since President Trump took office. Now, barely a third has favorable views, down more than 30 points from just two years ago. 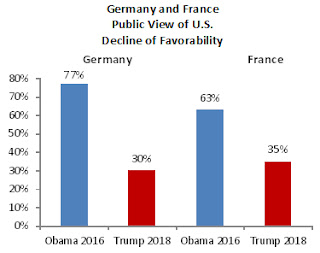 The soft power of a nation – its ability to persuade – is often linked to the image of the primary leaders. The silence at the Munich Security Conference is also explained by the low opinion President Trump is held in by the publics of U.S. allies. Only 9 percent of the French, 10 percent of Germans, 7 percent of Spanish and 28 percent of the UK publics have “confidence in the U.S. president to do the right thing regarding world affairs.” Trump is trusted in Israel (69%). 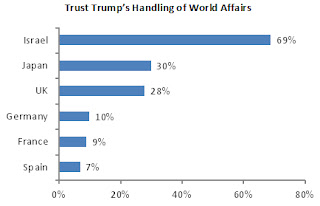 Pew and other international pollsters cite several factors that are key in a country’s reputation:


The U.S. is failing in all three of these metrics in many western European countries and especially in Germany and France.

After numerous international meetings, especially with European leaders, the polite reserve of diplomacy is over. The U.S. and Donald Trump are hearing what our historic allies think. There will be policy repercussions as they begin to assert more resistance to our expectations of joint actions and cooperation, for example, on Iran, in Syria and having missiles in Europe.