Donald Trump’s re-election is in trouble, with early polls showing more than 55 percent of voters saying they will “definitely not vote for him.” But, one state he knows he must have regardless of the early polls is Florida. And, the good news for Trump is that the midterm elections showed the GOP is very competitive in Florida. They won the governorship, defeated a three-term incumbent Democratic senator and have control of the state legislature. Exit polls and more recent polls show Trump’s approval higher in Florida than nationally.

But, Trump’s need to win Florida is bad news for Nicolás Maduro. More than 300,000 Venezuelans have escaped to Florida from the country’s political and economic collapse. Like the Cubans who escaped the island since the 1960s, especially in the early years, it can be assumed expats will appreciate the President and the party that resists their oppressor and advocates for the country’s return to democracy.

Besides Trump’s political motivation, the anti-Maduro effort has some high-profile advocates, who have long opposed Latin America’s socialism and dictatorship. Senator Marco Rubio has been a consistent advocate for the restoration of democracy in Venezuela. National Security Advisor John Bolton and newly appointed Elliott Abrams as Special Envoy to Venezuela are strong advocates of the conservative viewpoint of Latin American politics.

Although there’s risk in the aggressive U.S. posture, it’s possible Maduro, his cronies and Cuban allies may be heading soon to their yachts and planes, sort of a reversal of January 1959 when Americans and Cubans opposed to Castro’s takeover motored out of Havana. 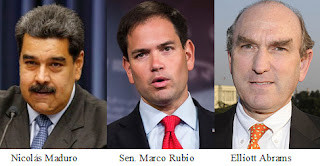