Crises of Leadership Among the Allies

The leaders of the world’s most powerful allied democratic nations are all supported by well under half of their respective citizens. The collective average approval of the heads of state of the big five allies is about 35 percent. In fact, the two most currently popular leaders are Angela Merkel at 40 percent, who just ceded power in Germany after repeated election losses, and Donald Trump , who, while remaining in a narrow range of public approval (40%), runs a chaotic administration, which faces shutdowns, declining re-election chances and an impeachment. He also is not much of an ally or an advocate of democracy in the traditional post-WWII sense. 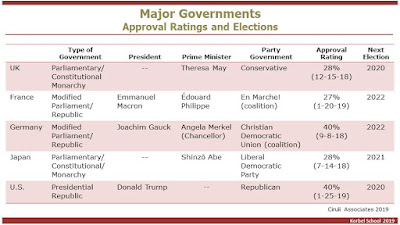