President Trump’s wall funding demand is driving him toward declaring a national emergency. Unfortunately, as of the first week of February, at the moment of his rescheduled State of the Union speech, he has little support for the move. 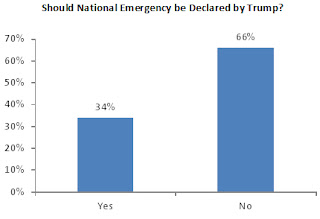 He has claimed border crossings with Mexico are a national emergency without much success with the public. He has claimed the wall is essential to national security, also without much support among the public. Although Senate Republicans support his wall funding, it’s without enthusiasm and with defections. They are in full revolt over the use of emergency power for such a contentious presidential initiative.

Unfortunately for Trump, his only other strategy – a shutdown – was a disaster when he declared he was happy to take responsibility for it to build the wall. After 35 days, he submitted to reopening the government as he lost public and Republican support. He is still smarting over that loss. He has made it clear he doesn’t approve of the congressional effort to find a compromise and, in fact, prefers his executive action approach. Trump’s actions will, of course, reinforce the arguments heard frequently that he really doesn’t have much “ability to make deals with Congress” (64% not much or no ability, CBS poll).

His embarrassment over the shutdown now has him attacking Nancy Pelosi directly as “being bad for the country,” a riff on his “enemy of the people” meme used when he’s not happy with news coverage. It’s not likely to help. Trump has lost credibility on the wall and support for a shutdown or an emergency declaration as a solution.
Posted by Floyd Ciruli at 2:27:00 PM