In a February 10 Sunday Prospective page commentary in the Denver Post the Mile High City’s exploding growth is the major topic framing the third term re-election effort of Mayor Michael Hancock and his challengers.

After a decade of slow growth through the dot.com bust and the Great Recession, Denver’s population growth since 2012 has exploded. In the last seven years, the city has grown by 100,000 residents and it’s noticeable on congested roads, in crowded restaurants, in gentrifying neighborhoods, and in cranes working overtime in the city’s development hotspots.

The upcoming Denver mayoral election on May 7, 2019, has become dramatized by tensions caused by urban growth. If Michael Hancock’s challengers force a runoff (a dozen candidates at last count), it will be largely because of the political disruption of Denver’s surging population boom. 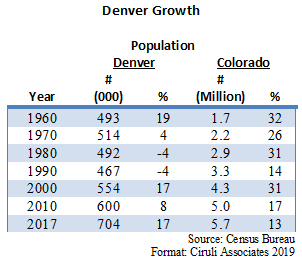 See The Buzz: Growth and No Growth – Top Issues in Colorado
Posted by Floyd Ciruli at 2:50:00 PM