Since October 2018, as the market began to decline, the midterm election rendered a judgment on President Trump’s first two years, and as more and more officials in the administration quit or were pushed out, the President’s approval ratings have followed, hitting their lows in late January at the conclusion of the shutdown. Negative spreads of up to 10 points, which were common, were replaced by low double-digits, jumping to 20 points in a few polls.


Trump is hoping his State of the Union speech is a reset for public perception and a potential start-up of his re-election. One can see why he was anxious to accept Speaker Pelosi’s invitation, whenever it came. It’s hard to beat the well of the House for gravitas and audience.

The Democratic field, as of March 1, shows name identification is still dominating early Democratic voters’ choices. The range of merging the latest national polls of 12 candidates runs from Joe Biden at 33 percent, to 1 percent for Amy Klobuchar and Kirsten Gillibrand. Near the top are Bernie Sanders; Kamala Harris, with her high-profile announcement; Beto O’Rourke, the charismatic outsider; and Elizabeth Warren, who has been running since 2016 and just announced. 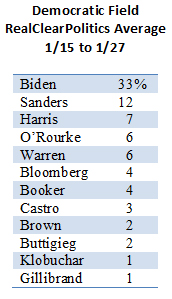 Early hypothetical polls show nearly every Democratic candidate beats President Trump by 5 or more points. Trump’s support tends to equal his approval rating in the low 40 percent range and Democrats are in the mid to upper 40s. Even Rasmussen, Trump’s favorite pollster, puts Democrats in the early lead. Of course, it should be remembered that Hillary Clinton tended to lead in the polls from June to November 2016, but it was deceptive as to what would happen November 6.
Posted by Floyd Ciruli at 3:04:00 PM