The Colorado Republican Party is Contracting

Rob Witwer changed his voter registration from Republican to unaffiliated. The former legislator was especially critical of the party’s performance in the 2018 legislative elections. He is a part of a major trend. The latest voter registration data confirms that both of Colorado’s political parties are losing to unaffiliated status among registered voters. The new century has been especially difficult for Republicans, dropping from the dominant party in 2000 with a 150,000 registration edge as George W. Bush carried the state, to a weak third place in January 2019. 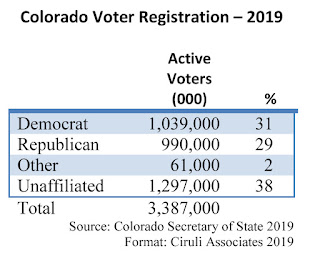 Obviously, the midterm election confirmed registration trends in voter behavior, with a Democratic sweep from statewide offices, down to county commissioners, clerks, sheriffs and among many other very surprised incumbent officeholders. The Donald Trump Colorado Republican Party has a current ceiling of 43 percent. Walker Stapleton, the Republican candidate for governor, received 43 percent. The same as Trump in his presidential run in 2016.

The massive 2018 turnout, especially of unaffiliated voters, is an undeniable message to both parties – there will be few successful elections in Colorado without winning majorities of unaffiliated voters. And, although Colorado natives and the old guard can complain about outsiders moving here, many of the 2018 voters were, in fact, longtime residents motivated by Trump and the chance to send a message. But, new or old, expect them to return to the polls in 2020.

The challenges for Republican Party leaders and candidates was highlighted in new Republican voter poll reported in the Denver Post, which showed, in spite of their minority stature and midterm defeat, they wanted uncompromising conservatives (61%) as opposed to candidates that would reach across the aisle (33%). They approve President Trump by 90 percent, and they believe his emphasis on immigration is the same as theirs and shutdowns of government are justified. Neither position is shared by most voters, especially independents.

Although new Republican Party officials and aspiring candidates will come up with the tone and message to win legislative seats and counties where the party dominates, they will be immensely vulnerable in 2020 in more competitive seats. Democrats are likely to highlight Trump and those aspects of his personality and agenda that don’t appeal to a majority of Colorado voters.