After decades of steady and often spectacular growth, mostly from migration from other states (augmented by other countries), California’s growth has been cut in half the last eight years from its recent trend. Out migration now exceeds new arrivals. Florida and Texas continue on their recovery from the Great Recession starting in 2008. Both are drawing many U.S. residents to their economies and lifestyles. 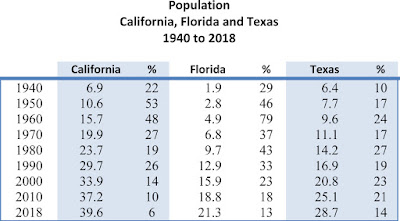 California’s attitude, especially in its high-lifestyle coastal region, is anti-growth, characterized by municipal and county restrictions on businesses and new housing. The cost of available housing has skyrocketed, pushing many Millennials to look for more affordable regions, mostly out-of-state. The Democratic single-party state government is also highly burdensome for new businesses and new housing development. Taxes are high and homelessness is now the top complaint in most communities.

The California dream has collapsed for many and other choices are being made.
Posted by Floyd Ciruli at 4:08:00 PM